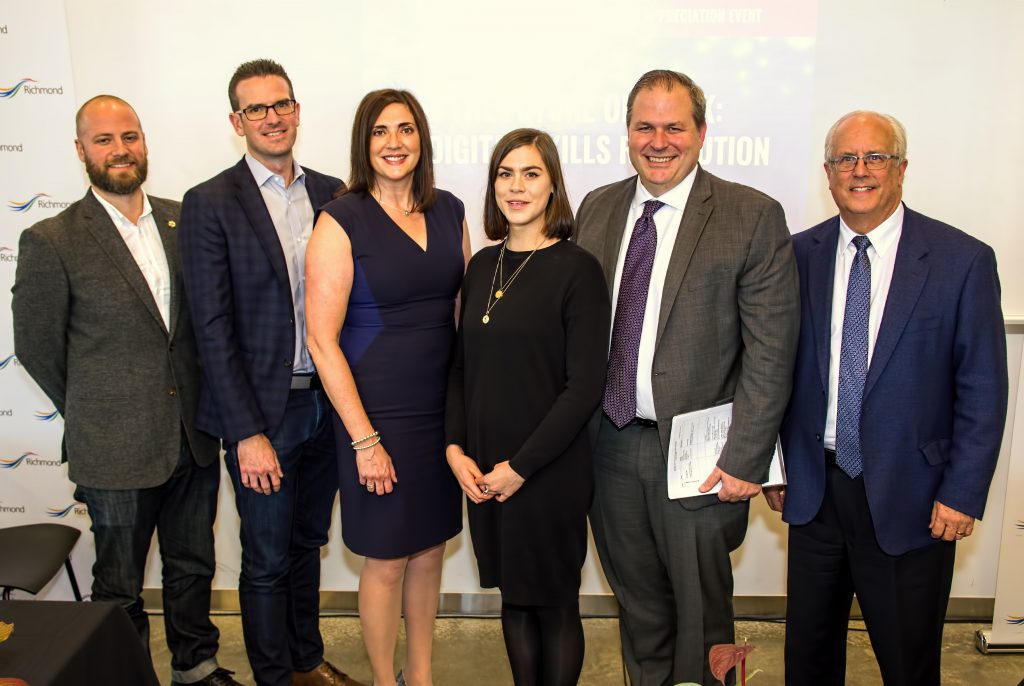 Businesses that invest in digital skills will be more resilient and successful when faced with technological advances, new ways of working and a labour shortage. This was the overarching message delivered by industry leaders at the City of Richmond’s 8th Annual Business Appreciation event held Thursday, October 3 at the Kwantlen Polytechnic University Wilson School of Design in Richmond.

“Workforce demographics, big data, the internet of things, automation as well as other technologies and factors are changing the way we work and live,” said Mayor Malcolm Brodie as he welcomed over 100 local companies and partners attending the event. “A 2018 report published by the World Economic Forum predicts that for every 1 million jobs that will be disrupted or lost as companies embrace the ‘Four Industrial Revolution’, another 1.75 million new jobs will be generated.”

Returning speaker, Jean-Francois Perrault, Scotiabank’s Senior Vice-President and Chief Economist, commented that despite an unprecedented level of uncertainty due to the evolving global trade environment, Canada’s economy continues to strengthen as employment and jobs grow at a record pace, with wages starting to rise. The biggest constraint to the Canadian economy is not having enough talent to meet the growing needs of companies.

Panel moderator, Deborah Versteeg, Director, People and Change Services at KPMG opened the discussion on ‘The Future of Work’ noting how the nature of work is drastically being impacted by technology and the importance of empowering businesses to understand and prepare for this change.

Consensus from the panel emphasized the importance of investing in teaching additional skills to existing workers to meet future job demands. Industry 4.0 technologies should be seen as an opportunity, rather than a threat, as they can help employees by automating routine tasks, freeing them up for more meaningful work. Industry 4.0 refers to the fourth industrial revolution that uses technological innovation such as artificial intelligence, robotics, and 3D printing.

“We shouldn’t be asking how technology can replace people, but rather how to integrate technology to make it easier for people to do their jobs” said Brad Tindall, President of Great Little Box Company. “A company’s biggest investment should be in its people.”

Holly Peck, Director of Human-Robot Interaction at Sanctuary.ai said she is commonly asked the misnomer question “what kinds of jobs are being automated?” She maintained that it’s not the jobs that are becoming automated; it’s the tasks that comprise the job that are. Artificial intelligence has the ability to create more time for enriched aspects of a job for its workers.

Panelist Kyle Treleaven, Vice-President and General Manager at BrainStation Vancouver empowers individuals and organizations through digital skills training. Kyle said businesses should prepare employees to shift their mindset about lifelong learning to gain the skills necessary for their work to evolve with technological advancements.

Mayor Brodie thanked businesses for their community contributions, acknowledging their success makes Richmond’s economy prosperous and the City a desirable place to live and work.